What We Saw, What They Saw: A Personal Journey 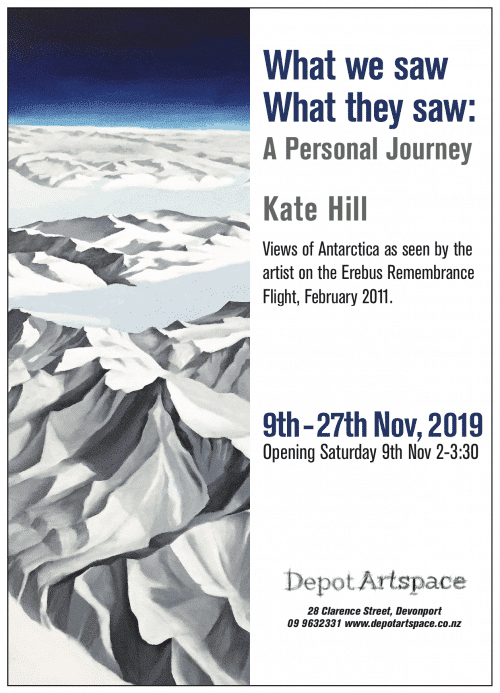 November 2019 will be the 40th anniversary of the Erebus disaster which affected not only those, like the artist, who lost loved ones but also many New Zealanders and people from further afield.

In February 2011 Kate Hill traveled, together with other relatives of the victims, to Antarctica on the Erebus Remembrance Flight and took a series of photographs from the plane and at Scott Base. Since that visit Kate has also obtained images, courtesy of Archives New Zealand, that were taken by passengers on the ill-fated flight and subsequently developed. Some of these were very clear, beautiful shots which inspired her to create a series of working drawings and paintings based on both sets of images hence the title of the exhibition.

Making the works has been a very personal journey which was, as much as anything, about bringing back their memories and merging them with those experienced by the artist and her travelling companions. For this reason the painting titles do not specify which of the two flights inspired them.
The resulting exhibition is small and intimate focusing on 5 vertical “ice panels” painted in oil on canvas. These are accompanied by several other works in various sizes.

Kate works part-time as an archaeological field worker and as a researcher/writer for built heritage projects. Her last substantial exhibition, “Burnt Archives”, was held at the Depot Artspace in 2013. Since then she has exhibited works in the Depot Gallery Members’ Show on an annual basis.